Stigma (, Sutiguma): Only a person who has a Stigma can become a Magika Stigma (, Magika Sutiguma, lit. "Stigma Magician"). Only those with Stigma can use powerful Summoning Magic so these people are strictly controlled by each country. When a Diva chooses someone for a legal contract they generally mark them with an Enigma when they turn 14. It evolves into a Stigma once they make a formal contract. In Japan anyone with an Enigma is obligated to enroll at the National Knight Academy and become a Knight whether they want to or not. A Diva can give out as many Stigmas as they want. It is possible to form a contract and grant a Stigma directly to someone but these are generally Illegal Contracts and the contractor runs the risk of being persecuted by their own country. Divas tend to be selective about their choices as the Stigma is impossible for the Diva to remove once it is given and the possessor must be obeyed. 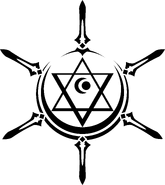 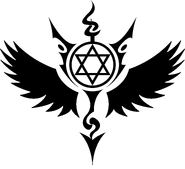 Stigma of Phenex
Add a photo to this gallery
Retrieved from "https://magikanokenshitoshoukanvasreus.fandom.com/wiki/Stigma?oldid=15840"
Community content is available under CC-BY-SA unless otherwise noted.